Ok, now that you know that BDD is about discovery, collaboration and examples (and not testing), let’s take a look at Cucumber.

Each scenario is a list of steps for Cucumber to work through. Cucumber verifies that the software conforms with the specification and generates a report indicating ✅ success or ❌ failure for each scenario.

In order for Cucumber to understand the scenarios, they must follow some basic syntax rules, called Gherkin.

Gherkin is a set of grammar rules that makes plain text structured enough for Cucumber to understand. The scenario above is written in Gherkin. 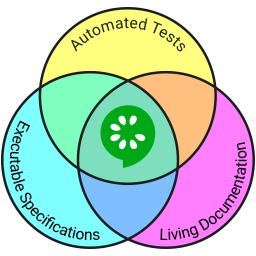 The Cucumber grammar exists in different flavours for many spoken languages so that your team can use the keywords in your own language.

Gherkin documents are stored in .feature text files and are typically versioned in source control alongside the software.

What are Step Definitions?

Step definitions can be written in many programming languages. Here is an example using JavaScript:

You can help us improve this documentation. Edit this page.